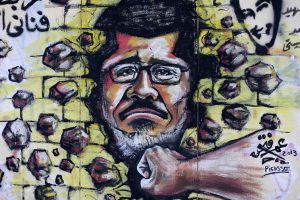 Graffiti depicting Egypt’s Islamist President Mohammed Morsi covers an outer wall of the presidential palace in Cairo, Egypt, Monday, July 1, 2013. Hundreds of thousands thronged the streets of Cairo and cities around the country Sunday and marched on the presidential palace, filling a broad avenue for blocks, in an attempt to force out the Islamist president with the most massive protests Egypt has seen in 2½ years of turmoil. (AP Photo/Hassan Ammar)